Research in our group currently focuses on two main themes: (1) ultrahigh-temperature metamorphism and (2) tectonic fluxes of carbon and the deep carbon cycle. Each has many potential avenues for exciting field, laboratory, and /or theoretical research projects that can be tailored to student’s interests and goals.

Ultrahigh-temperature (UHT) regional metamorphic rocks form at extreme temperatures in excess of 900 ºC. Our group has discovered the first known UHT locality in the United States (click here for more information). The field area is in northeastern Connecticut and is characterized by spectacular examples of garnet and aluminosilicate-rich gneisses (Fig. 1). Of particular interest are garnet porphyroblasts with crystallographically-aligned rutile and ilmenite needles (Fig. 2). These formed by exsolution from original Ti-rich UHT garnet during cooling/exhumation. Laboratory investigation of the needles and other petrographic features confirm that the rocks were heated to at least ~1000 ºC, far beyond the temperature limits of normal regional metamorphism.

UHT metamorphism is a relatively recently recognized phenomenon worldwide. Consequently, many questions remain about what it is and why it happens. Why did the rocks get so hot? At what depths and pressures did UHT metamorphism occur? What was the tectonic setting, and how were the rocks exhumed? When did it happen? Were melts and fluids involved and, if so, did they originate in the crust or the mantle? Our group is actively working on these and related questions. Moreover, we have identified more potential areas of UHT metamorphism in southern New England that require further mapping, sampling, and analysis. 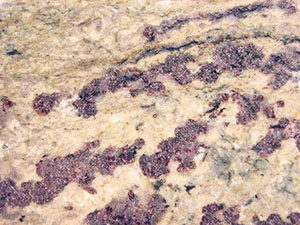 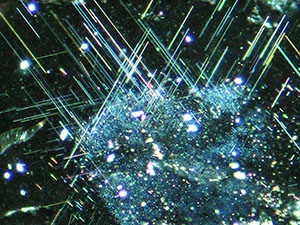 Figure 2. Photomicrograph of oriented rutile
needles in garnet. Garnet core appears cloudy
due to the presence of many tiny rutile and
fluid inclusions. Crossed polars; field of view
~1 mm.
Tectonic fluxes of carbon
Carbon fluxes from orogenic belts and subduction zones into the shallow hydrosphere and atmosphere are probably the most poorly-constrained contributions to the global geologic carbon cycle. Are collisional orogens and subduction zones net carbon sources or sinks? Does metamorphism release enough CO2 and other C species like CH4 to impact the shallow carbon cycle and global climate?
Our group is actively studying such questions to better understand how metamorphic processes fit in to the deep and shallow carbon cycles. For example, it has long been held that decarbonation in subduction zones was dominated by simple reactions involving water and CO2. Our recent work shows, however, that large amounts of CaCO3 (aragonite) can actually dissolve in deep subduction zone fluids, releasing far more CO2 than thought possible based on simple devolatilization reactions (Fig. 3; click here for more information). So it’s now critical to examine carbonate-bearing terranes and re-evaluate reaction mechanisms. The ultimate goal is to determine orogenic CO2 fluxes and their impact on other components of the carbon cycle. Field work is ongoing or will be started in a range of field areas, including New England and the Mediterranean region (Greece, Corsica). 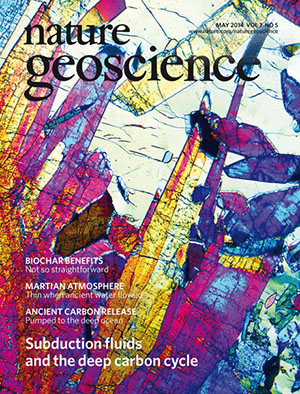