During February break, the students and Prof. Blake traveled to the Dominican Republic  to conduct  field research, thereby coupling applied science field experience with a rich cultural history experience.  At UNIBE, our partner university in Santo Domingo, the research team processed  water samples collected  from the Caribbean Sea and local rivers using laboratory facilities/equipment provided by UNIBE, then samples  were then shipped back to Dr. Blake’s lab at Yale University in New Haven, CT for further analysis.

Once in the DR students stayed at the Amistad Center for Arts, Education and Research in the Colonial City of Santo Domingo. The mission of the Center is to create a regional hub that offers language and cultural immersion programs and facilities to house such programming. The Center prides itself on understanding the needs of students and study abroad programs and its ability to synthesize international and domestic institutions and agencies to meet the needs of its clients and participants. The Amistad Center is one of the 20 oldest buildings in the hemisphere. It is about 20,000 square feet distributed in two floors, plus a large size court yard or atrium. The Center is complete with galleries, classroom space, sleeping accommodations and dining facilities.

The students gained a firsthand understanding of the historic crossroads of the transatlantic slave trade through a dynamic curriculum which included lectures, experiential activities and tours of the Colonial City. Santo Domingo’s Colonial City is 1.6 square kilometers. It houses some of the oldest buildings of the northern hemisphere and is a place of a number of firsts. It has the first University, first hospital, first grid design city and oldest cathedral of the Americas. It is the geographical epicenter where European, Indigenous and African cultures converged as part of the development of the transatlantic slave trade.

The interns led several service learning projects at a local cooperative farm in the Los Calabazos community, located 1.5 hours north of Santo Domingo. The Sonido Del Yaque Farm and Ecolodge is locally owned and operated by the New Hope Women’s Club. They believe in using the lodge as a way to improve the lives of their families and the community, and strive to promote renewable resource strategies locally and globally.

Sonido Del Yaque is completely “off the grid” using two essential renewable energy sources. The micro-hydroelectric plant harnesses the power of the Yaque River to help supply our guests with hot water from a clean energy source. The project also utilizes a system called a Biogas processor. Biogas is an alternative energy source derived predominantly from the break down of organic waste by bacteria and other microorganisms. This system provides gas for cooking and lighting, the latter through specially designed mantles. The Women’s Club organically farms the land and supports over 40 families in the area.

Upon returning home the students represented their school, Common Ground High School, at the United Nations in New York and also presented on their findings and experiences at their  high school and to the general public at the Pecha Kucha event in New Haven in May 2012. 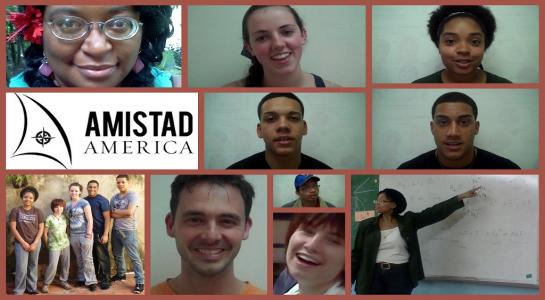 Samantha O’Brien- Senior. Has graduated and was accepted to College of the Atlantic. She was inspired by the community service projects and feels the whole experienced opened her world up as well ass prepared her for college level science.

Lanissa Gardner-Junior. A tenacious task master, this experience gave her, her first out of country experience. She wants to be a teacher and says that, “Dr. Blake blew my mind with everything she knows and how she shares it.”

Jackie Failla-Junior. Fell in love with the Dominican Republic. Even though she struggled with the chemistry concepts first introduced she made quantum leaps by the end of the internship and says she would love to pursue field research.

Caleb Jackson- Sophmore. The youngest of the group, Caleb found the lab work to be most challenging and beneficial.

Alejandro Meran-Senior.  A native of the Dominican Republic, Alejandro moved to the States when he was 7. He had not been back since. It was very special for him to arrive in his home country where we reunited with family and friends. He was accepted to  U. of Connecticut (UCONN) and his pursuing chemistry.

Michael Bruno- Senior. Michael enjoyed the water collection and filtering process. His strong chemistry skills were helpful as he was able to tutor some of the other interns. Though he became very sea sick during the research cruise, he holds steady that that was his favorite part of the trip.  He was also accepted to UCONN and will be focusing on biochemistry.

The mission of Amistad America Inc., is to teach the important lessons of history inherent in the Amistad incident of 1839. Amistad serves as an enduring symbol of unity and the human struggle for freedom. In shedding light on the facts of our collective history and the legacy of the transatlantic slave trade, Amistad America provides a peaceful means by which individuals and communities can learn together and address the issues of racism and intolerance with a positive goal of building bridges of mutual respect and understanding.

Sailing more than 14,000 miles retracing the infamous middle passage, the Amistad returned home in June 2008, furthering the cross Atlantic discussions of humanity and justice that the ship represents.  The year long voyage was an epic journey commemorating victories for abolitionists on all sides of the Atlantic Ocean and the 200th anniversary of the abolition of the slave trade in the United Kingdom and the United States.

Amistad crew and students worked with international agencies and organizations in the United States, Canada, Great Britain, Europe, West Africa and the Caribbean in the recognition of the end of the trade and unity for communities separated by the African Diaspora.

During the transatlantic tour, the Amistad visited Halifax, Nova Scotia; London, Bristol, and Liverpool England; Lisbon, Portugal; Freetown, Sierra Leone; and Praia, Cape Verde.  Freetown, Sierra Leone, the original West African homeland of many of the Amistad captives, was a symbolic “homecoming” and a profound experience as the crew, students and church organizations, non-governmental organizations and the governments of Britain, the United States and the United Nations worked together in a show of cooperation and celebration of justice and peace.  The Atlantic Freedom Tour was endorsed by UNESCO’s Slave Trade Route Project; The Schomburg Center for Research in Black Culture, in New York City; the Museum of the Atlantic, Halifax, Nova Scotia; The Black Loyalist Society of Nova Scotia; and numerous other historians and scholars currently focused on the history of the Transatlantic Slave Trade.

As part of its education mission, the Freedom Schooner Amistad paired with museums, schools and outreach programs to tell the history of the Amistad rebellion and trial as a victory for human rights.  Through the Atlantic Freedom Tour, Amistad crew and educators share the history of the trade and highlight the significant way the legacy of that history reflects in today’s social, political and cultural character. Thousands of school children visited the ship and through more than 50 public ceremonies and sailing events during the tour more than a million people were able to join in the commemoration.

The 2007-2008 Atlantic Freedom Tour officially ended in the fall of 2008 with a Congressional ceremony in Washington/Baltimore. 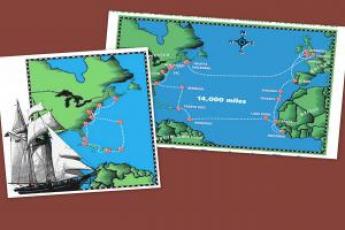 The Amistad’s second year-long tour - the Caribbean Freedom Tour - began in the summer of 2009.  The voyage included a return trip to Nova Scotia before heading south in the fall to visit Washington, D.C. and then to a handful of Caribbean countries all which have historical ties to the Atlantic Slave Trade.

In response to the earthquake that devastated Haiti in winter of 2010, AMISTAD Using the Sankofa program model pulled together a small pilot project conducted at the Amistad Center and aboard the Amistad Freedom Schooner in March of 2010. The Cross Cultural Center of Santo Domingo recruited students from Haiti and paired them with students from the Dominican Republic through a pilot project financially supported by the U.S. Embassy in Santo Domingo. After undergoing training in inter-cultural collaboration, the Dominican and Haitian students sailed together aboard the Amistad in a shortened version of the Amistad Sankofa Sail Program. Despite the short duration, the experience proved a profound one for the students and the eclectic American crew. It demonstrated the effectiveness of administering this program within the unique context of Dominican and Haitian relations, especially at this time of critical need for economic development and civic cooperation.

After timely and in depth governmental negotiations Freedom Schooner Amistad gained clearance to sail into Cuba as part of a 12 day cultural exchange tour.  The ship arrived with a crew of 18, including 12 professional crew and five students and a professor from the University of Massachusetts – Boston, who joined the boat in the Bahamas a week prior for the sail to Cuba.

In both cities the ship was warmly greeted by scores of government and cultural officials, historians, writers, newborns, elders, dancers and drummers.. “When the keel was laid for this vessel back in 1998, the dream back then – and back then it was only a dream – was to one day bring this vessel to Cuba,” Captain Sean Bercaw said after the ship had been secured and just before the celebratory performance. “That dream has come true today.”

The highpoint of the tour was a planned “homecoming” arrival in Havana, Cuba - the very port the La Amistad captives left from in 1839.  The Amistad marked the occasion on March 25th 2010, as an official part of the third annual UN International Slavery Remembrance Day.  From the deck of the Amistad, the crew and students participated in a live international video simulcast, linking students from a dozen countries that have been visited by the schooner. Over 5,000 visitors saw and toured the ship during her stay in Cuba.

The Amistad departed the Caribbean in early April and sailed to Mystic, Connecticut to complete her voyage.  The Caribbean Freedom tour was historical and exciting. The connections and youth feedback inspired the Amistad America to develop long term programming in the DR and Haiti.

Historical Revelance of the Amistad Incident of 1839

The capture of the Cuban schooner, La Amistad, off the coast of Long Island in 1839 sparked a diplomatic showdown and national political drama that lasted for years, pitting the U.S. President against the Courts and threatening to bring America to war with Britain, Spain, and Cuba.  At the heart of the case were 53 captives who had been kidnapped from Africa despite 30-year-old treaties that outlawed the importation of Africans for the purpose of slavery.  The Africans were transported to Cuba aboard an outlawed Portuguese slave ship named the Tecora, “sold” in Havana, and brought aboard La Amistad to be delivered to a sugar plantation along the Cuban coast destined for a life of slavery.

But the captives successfully seized La Amistad soon after it left Cuba and for 63 days drifted up the East Coast before being captured off Montauk, Long Island and towed into New London, Connecticut.  Word of the La Amistad’s arrival in New London quickly spread and rallied Black and White abolitionists then fighting slavery in America; the abolitionists proved the captives had been illegally kidnapped in Africa and won the first anti-slavery decision before the U.S. Supreme Court.  The case arguably turned the tide against chattel slavery itself and some say was the first of shot of the American Civil War.

The Freedom Schooner Amistad transformed a ship of enslavement to a symbol of hope and monument to the pursuit of universal human freedom. Today the replica sails the world as a continuation of that symbol and as a floating classroom, reaching thousands of people every year.  This 140-foot traditional wooden schooner was built at Mystic Seaport Museum and launched in 2000.