My research aims to advance our knowledge of climate and ocean dynamics in the context of contemporary global warming and past climate changes. In particular, I am interested in the problems of ocean general circulation, especially in relation to climate, ocean thermal structure, large-scale ocean-atmosphere interactions, climate predictability, and mechanisms of long-term climate variations. These are fascinating areas of research with many unsolved problems. My group engages these problems using modern observational and numerical methodologies and the tools of physics, mathematics, and computer sciences. In particular, we employ state-of-the-art general circulation models (GCM), advanced theoretical methods, statistical data analysis, as well as idealized and conceptual models of climate. The ultimate goal of my research is to advance our understanding of physical processes that control climate and ocean dynamics and to improve our ability to predict climate changes.

Quite often, we have vacancies for Ph.D. studies in our department for qualified candidates interested in pursuing these and other important problems. We also often have openings for postdoctoral positions to work in my group funded by NSF grants or by Postdoctoral Fellowships sponsored by the Department, Yale Climate and Energy Institute, or Yale Institute for Biospheric Studies. Below I describe several topics we are working on (these are just a handful of examples).

El Nino (past, present and future) and ocean-atmosphere interaction

One of the dramatic examples of climate phenomena that affect climate globally is El Nino-Southern Oscillation. This is a quasi-periodic oscillation that originates in the tropical Pacific due to large-scale ocean-atmosphere interactions. El Nino is its warm phase and La Nina - its cold phase. El Nino involves zonal advection of warm waters from the western equatorial Pacific to the east and a weakening of the atmospheric circulation (of the Walker cell) that happen every 3-5 years. 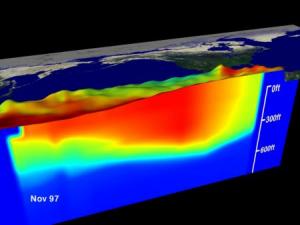 Can we accurately model and predict El Nino more than a few months in advance? Will a strong El Nino, similar to the event of 1997/1998, occur any time soon? Can Earth’s climate, with future global warming, slide to permanent El Nino-like conditions in the tropics? In fact, this was a dominant climate state in the past (Fedorov et al 2006).

Can climate change abruptly (Barreiro et al 2008), say, on decadal timescales? Apparently, this has happened on multiple occasions in the past and was related to reorganizations of the ocean meridional overturning circulation (MOC) that resulted in temperature shifts of the order of 10 degrees Celsius in the Northern Atlantic. Can such a rapid climate transition happen with future global warming? And if it does, will the abrupt climate change originate in high latitudes (say, in the northern Atlantic), or in low latitudes (in the tropical Pacific, for example)? What will happen with ocean circulation in global warming? Will the Gulf Stream disappear and parts of Europe get into a deep freeze? The answer to this latter question is a NO, and if somebody claims to the contrary he or she supports a myth that has no scientific basis. Nevertheless, changes in the strength of ocean overturning circulation are likely, which may still have an important effect on climate (Fedorov et al 2007).

A related question is what controls the ocean thermal structure of and its overturning circulation. It has been recognized for some time that the deep ocean is very cold (just barely above freezing). This is a consequence of two factors: (i) water masses in the ocean abyss originate in high latitudes when surface waters sink and (ii) there is very little vertical mixing in the ocean. 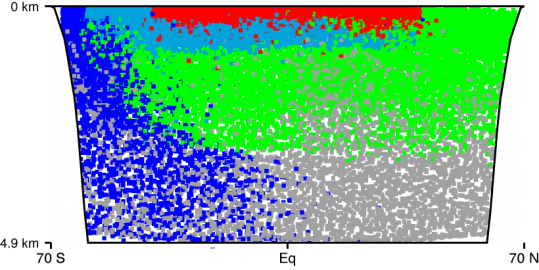 We have employed a Lagrangian ocean model (LOM) in an idealized setting to study the relative contribution of the two processes to the ocean thermal structure. The LOM computes actual trajectories of water parcels as they travel through the ocean and can be run in a fully adiabatic regime (no mixing whatsoever with surrounding waters after sinking). The figure above shows different water masses as simulated by this model (Haertel and Fedorov 2011).

The main driver of ocean circulation is surface winds that supply momentum and mechanical energy to the ocean. How is this energy transferred from the surface to the ocean thermocline, and to the deep ocean? Is the current generation of ocean and coupled GCMs are doing a good job in replicating this transfer (Brown et al 2010)? And if not, which physical parameterizations should be modified to improve the models? In fact, we have shown that coupled GCMs show too much energy damping and too low efficiency in transferring energy from the winds to the thermocline in the tropics. 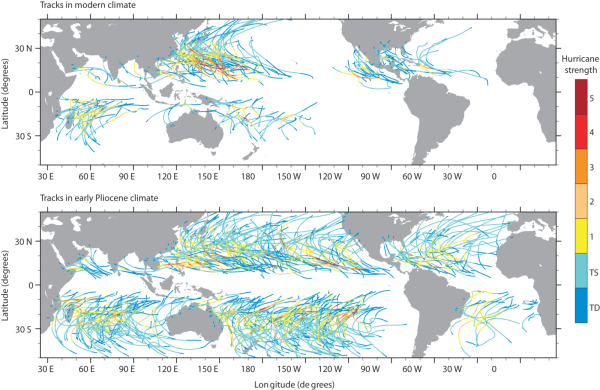 We have computed synthetic tracks of tropical cyclones in different climate states (modern, the Last Glacial Maximum, the Pliocene warm period) and studied their contribution to global climate. Recently, we published a paper on this subject in Nature (Fedorov et al 2010).

I am also interested in various problems of geophysical fluid dynamics, physical oceanography and applied mathematics (models of the ocean thermocline, oceanic circulation, equatorial oceanography, small-scale air-sea interactions, wave breaking, pattern formation, e.g. Fedorov and Melville 2007) and paleoceanography (the low-gradient paradox of the Eocene, a permanent El Nino of the Pliocene, climate sensitivity through time, mechanisms of the Ice Ages), but these are just a few examples of what I do.